Ready to appraise the market opportunities and marketing for breadfruit?  It is important to have an appreciation of the value chain in which you would be involved in.  There are likely to be several different breadfruit value chains in which your breadfruit could be sold.   You need to know who the various actors/participants are in the chain and what they contribute to the final product that is sold to the consumer.   You will need to decide if you just want to be involved only in the growing of fresh breadfruit and/or whether you want to also invest in additional value-adding activities.

In some Pacific Island countries, such as Fiji, breadfruit is a relatively minor seasonal food staple, of which only a small fraction compared to cassava is consumed; breadfruit is also less important than taro and kumala.  In contrast, in Samoa (and Rotuma, Fiji), breadfruit is a major basic food largely grown by households for their own subsistence consumption (Fig. 1).   Over the last two decades, the price of breadfruit in Samoa has essentially doubled in real terms. This price situation is unlikely to change for the foreseeable future, unless breadfruit starts to be grown as an orchard crop.  In Fiji, high-quality orchard production has come on stream.  Selling fresh breadfruit on the local municipal market is now generating good cash flow for orchards in western Viti Levu (Fig. 2).    For example in 2017, the value of fresh breadfruit sales on the Lautoka market for two Johnston Rd. orchards were: (a) Prakash – 1600kg @ FJD 1.50 per fruit = FJD 2400; and (b) Sahn Ali – 1800kg @ FJD 2.00 per fruit = FJD 3600.

For fresh breadfruit the main substitutes are the traditional staple crops, imported potatoes and imported grains (rice and wheat products).  In Fiji, fresh breadfruit is now relatively price competitive with taro, and can be expected to become increasingly so as good quality breadfruit sourced from the orchards enters the market.  Furthermore, breadfruit (as discussed below), is expected to be better than taro at adapting to climate change.  Over the next 5 to 10 years, a market for fresh breadfruit of around 5-10% of the value of taro and cassava sales on the Fiji domestic market is seen as realistic.  In current value terms this would represent a market of more than FJD 10 million.

Fiji imports nearly 35,000 tonnes of potatoes annually.  This presents a major market opportunity for breadfruit.   Due to environmental and climatic considerations, locally grown potatoes are seen to be increasingly non-viable without substantial government subsidies.    Orchard-produced fresh breadfruit is already price competitive with imported potatoes.   However, the major disadvantage for breadfruit relative to potatoes is short shelf life.   Frozen breadfruit pieces are the obvious solution but such a product is not yet readily available on the market, and when it is available the price is likely to be significantly higher than that of imported potatoes.  There will always be a significant niche market for such products amongst more affluent urban consumers – particularly as the nutritional benefits of breadfruit become known. For the future, it is projected that the price of imported potatoes will also increase relative to breadfruit due to the impact of climate change (and furthermore tighter biosecurity enforcement may preclude import of diseased potatoes from Australia & NZ).

The expatriate Polynesian communities living in New Zealand, Australia, and the United States offer the main immediate market for selling fresh and frozen breadfruit (Fig. 3).  However, to export fresh breadfruit to these markets requires a bilateral quarantine agreement involving high temperature forced air (HTFA) quarantine treatment by a certified facility (Fig. 4).   Fiji, Samoa and Tonga have such a facility – but currently only Fiji’s facility is certified.   Fiji’s recent HTFA Commodity Industries Plan estimated a realistic market for fresh breadfruit to New Zealand and Australia of 500 and 250 tonnes respectively.   The market for frozen is estimated to be approximately the same – but without facing the quarantine constraints of fresh export (Figs. 5 & 6)

The Pacific islands are facing a diabetes epidemic and health-related disaster, with the region now ranking the highest in the world in terms of prevalence of diabetes. In 2011, Pacific leaders declared the non-communicable diseases (NCDs) epidemic a health and economic crisis and a threat to sustainable human development.

While many social and economic factors have contributed to the rapid and substantial increase in diabetes in the Pacific Islands, an overall increased consumption of westernized fast foods and neglect for the traditional diet has undoubtedly played a pivotal role.

Breadfruit, as presented in Module 4, is an energy-rich food, high in complex carbohydrates, low in fat, gluten free and a good source of fibre and minerals, such as iron, potassium and calcium. It is a nutritionally higher quality protein than occurs in imported staple foods, such as wheat, rice and potato. The starches in breadfruit are slow to digest leading to a sense of satisfaction for longer periods than when eating high glycaemic index carbohydrates– i.e. simple carbohydrates and sugary foods, thereby reducing the desire for constant snacking and hence lowering the risks of diabetes and obesity.  A substantial increase in breadfruit consumption can be expected to lead to a reduction in NCDs and thus have significant social and economic benefits.

These nutritional and health benefits, as they become known and are promoted, are expected to be important demand drivers for value added breadfruit products.  Breadfruit flour, chips and dough have been identified as important value-added products.   Wheat flour bread and buns are major mainstream consumer items for all income classes in both rural and urban areas of Pacific Island countries – with large volumes of wheat and wheat flour imported.  As indicated in Module 4 it is not realistic to expect 100% substitution of breadfruit flour in mainstream bakery products (bread and buns).  Breadfruit flour is gluten free and gluten (or baking powder) is required to make bread and buns rise.   However, as the Tutu Rural Training Centre experience demonstrated, breadfruit flour can be mixed with wheat flour up to a maximum ratio of 30% to produce more than satisfactory conventional bread and bun products (Fig. 7).  Work undertaken by the University of the West Indies found similar results (Fig. 8). For example, substituting only 10% of wheat product imports with breadfruit flour would represent a market of over 12,000 tonnes of flour (approx. 60,000 tonnes of fresh breadfruit) valued at some FJD 10 M.   Such volumes represent a market well in excess of the capacity to supply for the foreseeable future.

The more immediate local market potential for breadfruit flour is in the niche gluten-free bakery market.   Currently rice, cassava, maize and millet flour are available as gluten free flours (Figs. 9 and 10) and at present these imported flours are sometimes cheaper than breadfruit flour.

Estimates of the current global annual gluten-free market range from USD 3 billion to USD 15 billion and forecast to grow to USD 50 billion however, in the medium term it is unlikely that breadfruit could obtain a significant share of the global gluten-free market.    Nevertheless, over the next decade or so, this situation might change to favour breadfruit flour as the impact of climate change is increasingly felt on grain crops.   Export markets for breadfruit flour could well become a major opportunity if there is the necessary significant investment in breadfruit orchard development and commercial processing.

“What other marketing opportunities exist for processed breadfruit?”

Some unique processing characteristics offered by breadfruit are summarised in module 4.   Dr Richard Beyer has identified breadfruit starch as a particularly valuable natural thickener for food processing.  This thickener can be derived from breadfruit flour, without the particles disaggregating, by simply adding water.  It is not necessary to heat the liquid (as is the case with cornstarch), or to add chemical derivatives (as required for cassava starch).

Breadfruit starch offers the prospect of producing a variety of gluten-free mixes without heating or the addition of chemical additives. The high value products include: custard and Bisto TM sauce mixes, blancmange and a variety of dips.   Dr Beyer’s work at Tutu has successfully demonstrated starch production on a cottage industry scale and he believes that the starch production process could be readily scaled up to larger-scale processing operations if the necessary investment was forthcoming.   Important findings from Dr Beyer’s work are:

There is an urgent need for applied research work in developing custard mix products from breadfruit flour to better realize the increasing demand for processed breadfruit products.

Breadfruit is a Pacific Island staple food crop that is expected to adapt well to climate change.   Breadfruit’s resilience to extreme winds was demonstrated in Fiji with the passage of TC Winston.   Most of the breadfruit orchards bore the full brunt of this Category 5 cyclone in February 2016.  However, the long term damage was minimal as reported below:

The forecast situation for breadfruit in the face of climate change contrasts markedly to that for grain crops.  Climate change is expected to have a significant negative impact on global grain production, and in particular on Asian rice production.   This means that the real price of imported grains for the Pacific Islands is projected to increase significantly in coming decades.   This projection has major negative economic implications for the Pacific Island countries, where imported grains already represent more than half of their food imports and where food imports for many of countries already far exceeds the value of their total exports.  Thus, for a number of traditional staples, including breadfruit, climate change creates major local and domestic market opportunities.

The challenge for Pacific Island farmers and agribusiness is to be able to take advantage of this opportunity.  A significant transition will be required from what is essentially a highly perishable fresh “wild” harvest fruit, to an orchard-grown tree crop that is processed into products that can be substituted for imported grain produce.   The first initial steps have been made in breadfruit orchard development in Fiji and with start-up breadfruit processing development in Fiji, Samoa and Tonga.

“How do I decide where in the breadfruit product value chain I should operate?”

To prepare your business plan for a breadfruit enterprise you need to understand the value chain for the product that will be sold, and where your enterprise fits into the value chain.   Will my product be “pulled” through the value chain or will I have to “push” it through the chain?  Will your enterprise just be an orchard growing fresh breadfruit selling to traders, or do you plan to be involved in value adding and marketing?  The breadfruit value chain can be quite simple – such as selling fresh breadfruit on the municipal market.  On the other hand, it can be quite complicated – such as the export of quarantine treated fresh breadfruit or producing breadfruit starch for use as an ingredient in processed foods, such as gluten-free snakes, cake mixes etc.   Below is a value chain map (Fig. 12) involving the export of fresh “wild harvest” breadfruit from Fiji into New Zealand.   It is important for you to know what each of these actors contributes to the final product (breadfruit being on the plate of the consumer in Auckland), and ideally the reward they receive for making their respective contributions. 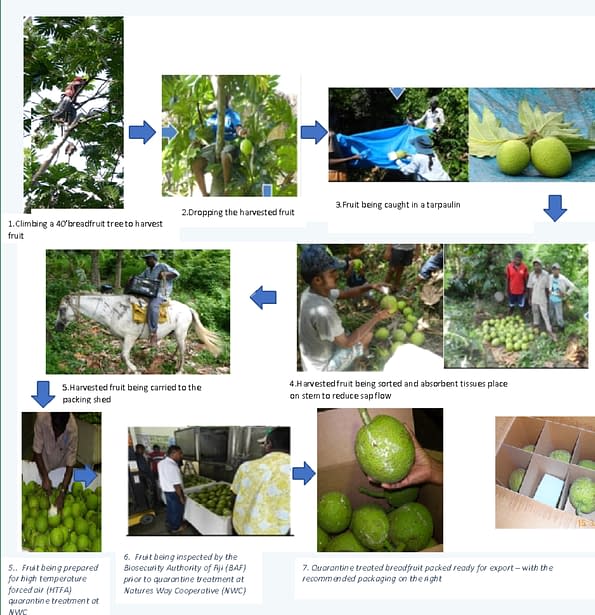